“We believe that the Holy Scriptures are contained in two books, namely, the Old and the New Testament, which are canonical, against which nothing can be alleged. These are thus named in the Church of God.

“The books of the Old Testament are the five books of Moses, to wit: Genesis, Exodus, Leviticus, Numbers, Deuteronomy; the book of Joshua, Judges, Ruth, the two books of Samuel, the two of the Kings, two books of the Chronicles, commonly called Paralipomenon, the first of Ezra, Nehemiah, Esther; Job, the Psalms of David, the three books of Solomon, namely, the Proverbs, Ecclesiastes, and the Song of Songs; the four great prophets, Isaiah, Jeremiah, Ezekiel, and Daniel; and the twelve lesser prophets, namely, Hosea, Joel, Amos, Obadiah, Jonah, Micah, Nahum, Habakkuk, Zephaniah, Haggai, Zechariah, and Malachi.

The Canon of Scripture

The word “canon” means a rule or a standard. (This is also the use or meaning of this term in the “Canons of Dort.”) The canonical books (and only the canonical books) are the inspired Word of God, and so are our only rule for faith and practice.

Both the Belgic Confession and the Westminster Confession of Faith1 include a list of Canonical books. We might be tempted to think that this is superfluous or unnecessary. (If we were to draw up our own confession of faith today, would we even think to include it?) But considering the historical context in which they were written (the 16th century Protestant Reformation), it should not be surprising to see the need for such confessional statements on the canonical books. And we no doubt still need that same clarity regarding the canonical books today. 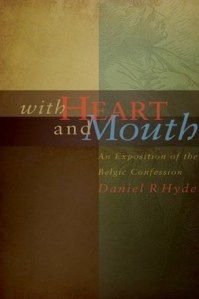 In his book, With Heart and Mouth, Daniel Hyde writes,

“The Confession lists the canonical books in opposition to Roman Catholicism (as well as Greek Orthodoxy), which added the Apocrypha to the Old Testament and regarded the tradition of the church as authoritative.” (p.76)

And so we see that the underlying issue regarding the idea of the Canon is the question of authority. (That subject is dealt with more directly in Article 5.)

The first part of this Article’s statement on the Canon says,

“We believe that the Holy Scriptures are contained in two books, namely the Old and the New Testament, which are canonical, against which nothing can be alleged. These are thus named in the Church of God.”

This is simply affirming that the list of canonical books that are included here is nothing new or controversial, but is the same list and number of books that the church down through the centuries has always held to be the canon of Scripture. Again, the writers of the Confession are seeking to demonstrate commonality and unity with the faith of the church throughout its history, not to innovate.

Of the Old Testament the Belgic Confession lists the same books, in order, that we have in our Bibles today. When it speaks of “the two books of the Chronicles” as being “commonly called Paralipomenon,” that means that those two books were sometimes known as “Paralipomenon,” which is a Greek term that means “things left over” or “things omitted.” In some sense 1 & 2 Chronicles were thought of as containing details that had been left out of the books of 1 & 2 Samuel and 1 & 2 Kings.

The book of Psalms is here referred to as “the Psalms of David.” This does not necessarily mean that the Confession teaches that David himself is, in fact, the human author of all the Psalms, but the book itself was commonly associated with his name.

The book of Lamentations is not explicitly listed by name here, but rather is included as part of the writings of Jeremiah. The Confession here lists the names of “the four great prophets” (Isaiah, Jeremiah, Ezekiel, and Daniel) themselves, rather than the names of the books written by them.

There is nothing unusual about the list of books included in the New Testament here. The only thing of note that one might find interesting is that the Confession here speaks of the book of Hebrews as being one of the epistles of the Apostle Paul! This was not an uncommon view in the history of the church, although it is far less common today. (Either way, the book of Hebrews has always been held to be canonical, even if anonymously written.)

When the Article 4 speaks of “the other apostles,” and includes James and Jude, it is not mistakenly including them as if they were included among the original 12 apostles & Paul, but rather that the books which were written by them were apostolic in nature, and therefore received as canonical by the church through her history.

The next two (2) Articles in the Confession deal specifically with the authority of the Scriptures (Article 5), as well as how we are to view the non-canonical books (i.e. the Apocrypha – Article 6).

1 The Westminster Confession of Faith lists the books that do (1.2) and don’t (1.3) belong to the Canon of Scripture.