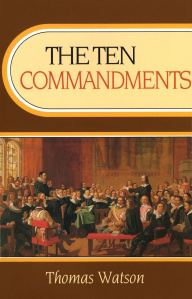 In our series of brief studies going through the ten commandments we now come to the seventh commandment, which says,

This commandment (like the rest of the ten commandments) is what I like to call an “umbrella category.” What I mean by that term is that this commandment represents a particular category of sins or transgressions, and so there are many different ways that a person can break it.

In the sermon on the mount (Matthew chapters 5-7) the Lord Jesus put it this way:

“You have heard that it was said, ‘You shall not commit adultery.’ But I say to you that everyone who looks at a woman with lustful intent has already committed adultery with her in his heart.” (Matthew 5:27–28, ESV)

Here Jesus teaches us the proper understanding of the seventh commandment. And in doing so He makes it clear that this commandment forbids not just sinful actions, but also sinful thoughts and desires as well! A person can be outwardly chaste, and yet inwardly still be guilty of adultery. And so it is not just sexually immoral actions that are to be avoided and repented of, but also sexually immoral words and thoughts as well.

This commandment against sexual immorality is worded in terms of the particular form of sexual sin that in some ways is the most heinous and serious version of it – adultery.

What makes adultery so serious a sin before God? Adultery, properly-speaking, is not just sexual immorality (as serious as that is), but is also theft (and so a transgression of the 8th commandment as well). Thomas Watson writes,

“It [adultery] is a thievish sin. It is the highest form of theft. The adulterer steals from his neighbor that which is more than his goods and estate; he steals away his wife from him, who is flesh of his flesh.” (The Ten Commandments, p.155)

I’m tempted to say that this commandment is the most-neglected and most commonly broken of all of the ten commandments in our day, even among professing believers in Christ. (In all likelihood that dubious distinction probably belongs to either the 2nd or 4th commandments.)

Whatever the case, the seventh commandment is disregarded, redefined, and transgressed among many professing Christians to such a degree that there no longer seems to be much of a difference or distinction between the church and the unbelieving world around her.

This simply should not be so.

In 1 Thessalonians 4:3 Paul told the believers in Thessalonica, “For this is the will of God, your sanctification: that you abstain from sexual immorality.” He said that, not because sexual morality is the end-all, be-all of the Christian life, but because in a debauched culture, abstaining from sexual immorality is one of the primary distinguishing marks that set believers apart from the world around us.

That is as true in our day as it has ever been. Abstaining from sexual immorality is still very much the will of God for His redeemed people, and it is still our “sanctification,” something that sets us apart from the world.

May the Lord grant revival and repentance to many, starting with those of us who profess to know Christ, so that we might follow the will of God in these things. And may He grant repentance, faith, and forgiveness to many who have committed sexual immorality, that they might know peace with God, and begin to follow His will in these things.

What is God’s standard for the sexuality of the Christian? The Apostle Paul doesn’t mince words – he gets right to the point. In Ephesians 5:3 he writes,

“But sexual immorality and all impurity or covetousness must not even be named among you, as is proper among saints.”

Here we are told that sexual immorality is not even be “named” among us! Now Paul isn’t saying that it should never be the subject of conversation among us (although he deals with filthy talk and dirty jokes in v.4). He himself is bringing up the subject in this very letter, so that can’t be his point. What he is saying is that sexual immorality should be so exceedingly rare in the lives of believers so as to be unheard of among us. It should be so rare that if someone were to accuse one of us of sexual immorality, no one would believe it because it would seem absurd.

But is that the case in today’s church?  Is anyone (inside or outside of the church) really shocked or even more than a bit surprised to hear a report of sexual immorality within the church? Sadly, I think not.

Ask yourself this simple question: If someone were to accuse you of sexual immorality, what would the people who know you think? Would they have a legitimate reason to think it might be true?

Sexual immorality in the church is the proverbial elephant in the room – it is the thing that everyone knows is there, but hardly anyone wants to acknowledge it or talk about. Maybe we are hoping that if we ignore it, it will just go away. It is the scandal of today’s evangelical church. How many professing Christians these days seem to think nothing of committing fornication, cohabitation, adultery, and even sodomy! How many “good Christian girls” get pregnant out of wedlock (and all too often not just once) without the slightest hint of church discipline being initiated for the repentance and restoration of the persons involved? In this we have become conformed to the world.

How has this mindset crept into the church? In our day preachers and teachers in the church often avoid the subject altogether for fear of offense. Or in many cases churches and even entire denominations go so far as to explicitly deny or contradict the plain teaching of Scripture on this matter. This should not be so.

Paul goes even further – he even includes our words. Not only should our lives be free from impurity of filthiness, but our speech should be free from it as well! In v.4 he writes,

“Let there be no filthiness nor foolish talk nor crude joking, which are out of place, but instead let there be thanksgiving.”

A dirty mind expresses itself not only through filthy conduct, but also through filthy speech, foolish talk, and crude humor. Such things are truly “out of place” for those who call ourselves “Christians.” And what should take the place of filthy conversation? Paul says, “ . . .but instead let there be thanksgiving.” Why thanksgiving? Thanksgiving is what should describe the heart attitude of the Christian toward God’s good gift of sex within marriage between a man an a woman. Sex itself is not a shameful, unspeakable, dirty subject. It is a gift of our loving God, and it is not to be abused, twisted, or distorted.

Christians are not anti-sex. The Bible is not anti-sex. We are against sexual immorality. We are for celebrating and sanctifying God’s good gift of sex within the bounds where God has reserved it – between one man and one woman in marriage, which is also a gift from our Creator.

May God grant His church grace and repentance, so that sexual immorality will become so rare as to be unheard of among us. To Him be the glory.

Sex & money.  Both are pretty important parts of our lives.  Both are good things, given by God, and loaded with tremendous potential for good in our lives.  And both are also fraught with dangerous consequences if abused or misused.

We seem to approach both areas [sex and money] with a timidity, reserve, and embarrassment that does not make personal, cultural, or biblical sense. Pastors are often hesitant to teach and preach about money issues as if somehow this topic is outside the boundaries of what they’ve been called by God to do. And if they’re cautious in talking about money, they’re even more so when it comes to the topic of sex. Meanwhile, in both areas the world around us never seems to stop talking. (Sex & Money, p.17)

If we as believers are not properly equipped with a biblical view of sex and money, we will be ill-equipped for living in a world that seems to be utterly consumed by them.  And if we are not thinking about these things biblically, there is little doubt that we will be influenced by the world’s faulty view of these things instead.  And so (to use Paul’s words from Romans 12:2), we should not be surprised if more and more professing Christians are conformed to this world in these areas, rather than being transformed by the renewal of our minds.

So what are we to do? We must be transformed by the renewing of our minds (Romans 12:2).  We must, by God’s grace, conform (or renew) our thinking on these subjects to the Word and will of God, not to the pattern of this evil age.

For that to happen, pastors and teachers in the church must be committed to teaching the biblical view of sex and money.  While we certainly should not be fixated on these subjects in an unhealthy or unbalanced way, we must speak about them wherever, whenever, and however the Scriptures do so.  To do less than that is not only to fail to declare the whole counsel of God (Acts 20:27) to the people of God, but then also to fail to be innocent of the blood of all men (Acts 20:26).